Coming back to you with another review, look at that two shows this month! On Wednesday night I went to see ‘Silence’ by Nicola Werenowska at The Mercury Theatre in Colchester.

‘Silence’ is the story of three women: one a mother, a daughter and a grandmother all of polish decent. The way, the show was written and was directed brilliantly, but very interesting. I have been going to shows for many years, but this is the first time I have seen a show where it is performed entirely in third person.

This was very interesting to me. I was expecting it to be a very traditional play with normal scenes where the characters would interact with each other, and yes there was some of that, but it was kind if here and there, only to expand on the story. There was very little scenery and very little props which I think only added to the character of the whole show. 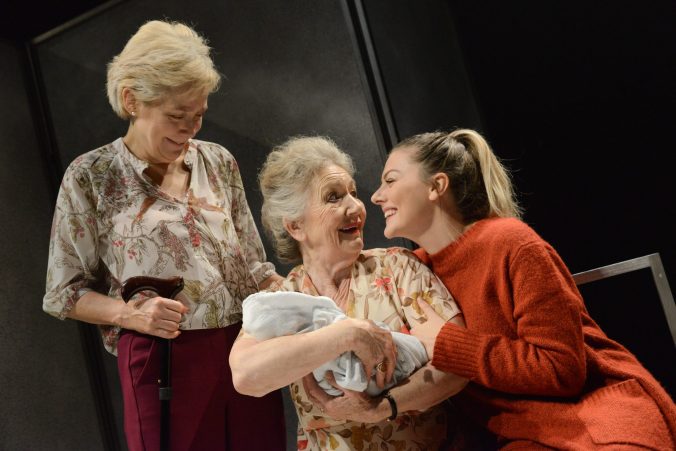 The show tells the story of one family but from three very different perspectives. one from a young twenty-something year old, about to come out of university, to a middle-aged mother, who is struggling to connect with her husband and daughter. To a polish grandmother very set in her ways and likes everything just so.

Having all three characters, all on stage, all doing different things, in different places, all at the same time, was a little confusing at first, but after a few scenes of the show, you picked it up quickly and were able to keep track. There were times where I didn’t quite understand something, but then the show would touch upon it again, so then it made it easier to understand. One thing  I wanted to outline is the great use of costume. As the stage, set, and three chairs that were used throughout the show were all grey. It made the colours of the costumes of all three characters stand out hugely, so I can only give massive praise to the director here because then the characters more so much easier to see! I later found out whilst talking to the director, that through the show the character’s costumes would get brighter as the show progressed. Which I didn’t spot at the time, but it wasn’t until they said that I could see it, and that was brilliantly done!

Onto the rating then:

People Who A Visual Impaired: You will have no problem here, as the show is performed in the theatre’s studio it was nice and close so you can see that was going. The use of colour against the grey background, is great, because if you can limited vision then you will be able to track each character quite easily.

People With No Vision: Again with this show I think your do fine here, most of the show is dialogue with never little action, the actors will move from one end of the stage to the other from time to time. But as the space is so small, you should be able to track this very easily, and know where all three characters are at one time. There is an Audio Description available (see website for details) but if you can seem to get a ticket then if you go to a normal performance then you should have no problem.

‘Silence is running at The Mercury Theatre in Colchester from 12th – 20th of October, but it is also touring around the UK. So if for some reason you can’t get a ticket at The Mercury, Then I will leave a link for the show below also so you can see where they are going to be playing next.

As always I will leave a link to The Mercury website, you can find a link to show and ticket information: Here

You can also find a link to the actual show: Here